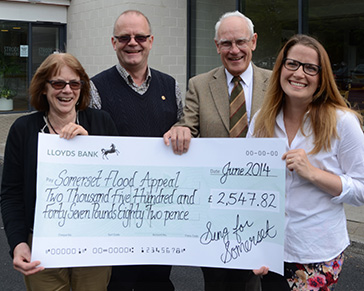 When Street resident Margaret Axhorn suggested to her husband, Peter, that she would like to hear a Welsh Male Voice Choir, little did she realise her dream would become a fantastic and charitable reality.

With Peter being one of two Church Wardens, his thoughts turned to hosting a choir in the Parish Church in order to raise funds for the Somerset Community Foundation Flood Relief Fund. But on approaching the Dowlais Male Voice Choir from Merthyr Tidfil, he realised the staging facilities at the Church would not be adequate in size, so he crossed the road to Strode Theatre and approached Liz Leyshon, the theatre manager, to see if a date might be available. It was, and on Saturday 17th May, Strode Theatre hosted a stunning choir concert, SING FOR SOMERSET, which both the organisers and the audience are unlikely to forget for a long time.

Dowlais Choir was soon joined by offers of participation from Bridgwater Show Choir and West-Country-based Folk choir Freshly Ground, which made for a very eclectic programme. The proceeds of the evening totalled over £2,500 including a retiring collection made by member of the local Lions Clubs. The money will be sent to the Somerset Community Foundation’s Flood Relief Fund, which is aiding families and micro-businesses still affected by the disaster with small grants and practical support.

The massed voices of the DOWLAIS MALE VOICE CHOIR opened the concert with Musical Director Darya Brill-Williams and accompanist Michael Jones, filling the auditorium with the rousing melodies of the Welsh Valleys. This was their first time on the Strode stage since 1972.

Their first set was followed by what possibly turned out to be the greatest surprise of the evening. FRESHLY GROUND, a traditional English folk choir under the leadership of Issy Emeney, sang unaccompanied a wonderful set of impeccably performed numbers, old and new, moving and engaging.

After the interval, the amazing young people of the BRIDGWATER SHOW CHOIR took to the stage. The group of 13 talented and impressively disciplined young performers included in their set six brilliantly executed contemporary numbers, accompanied by Musical Director Kat Stevens on the Theatre’s resident Steinway piano, and the whole performed to routines that would be at home on any West End stage.

The concert concluded with a second set by Dowlais Choir, bringing the audience to their feet in recognition of the wonderful quality of the human voice and the power of communal effort.

Mary Hancock, Deputy Chief Executive of Somerset Community Foundation, thanked the organisers and participants and spoke of the empathy that so many people, from all over the world, felt for the residents whose houses had been so badly affected. She revealed that the Flood Relief Fund now stands at over £1.1million and that the Concert’s proceeds will be used over the coming months to complete work and start on plans for future flood prevention schemes.

Liz Leyshon, Strode Theatre’s manager, was delighted with the success of the event. She said “I loved the concert, it was every bit as wonderful as I had expected, knowing the reputation of the choirs, and I am hugely grateful to all the singers who travelled here and who gave their time for the cause. They truly did ‘Sing for Somerset’.”